News Alert-South Fork Windfarm. Fire Island residents should be aware that in February 2022, ground was broken for the start of construction of New York's first offshore wind farm-- the South Fork Wind project, which will provide up to 130-megawatts (MW) of power, and which is expected to be operational by the end of 2023. The underwater power cables will come ashore in East Hampton and be connected to the grid via LIPA's East Hampton substation. See below for a figure depicting the location of the windfarm. See the following link for a fact sheet about the project: About South Fork Wind.

CLCPCA In 2019, New York State promulgated the Climate Leadership and Community Protection Act (CLCPA) which formalized a number of climate goals for the State including a goal that by 2050, greenhouse gas emission levels in the State, will be reduced by 85 percent when compared to the baseline year of 1990. To achieve this goal, the CLCPA identified a number of ambitious targets for the power sector; specifically requiring that by 2030, 70 percent of the State's electricity must come from renewable energy sources. In line with this target, with potential implications for coastal residents, is the requirement that by 2035, at least 9,000 megawatts (MW) of electricity should come from offshore wind energy. This is a substantive increase over a prior goal of generating 2,400 MW of power from wind by 2030. Information on the State's Master Plan for offshore wind, various fact sheets, as well as information concerning various studies and resources both completed and ongoing relating to offshore wind projects and impacts can be found here: NYSERDA Master Plan

NYSERDA Solicitations. To help achieve the CLCPA goals, the New York State Energy Research and Development Authority (NYSERDA) issued two solicitations (one in 2018 and one in 2020) for offshore wind power. As a result of its 2018 solicitation, NYSERDA awarded contracts with Equinor Wind for 816 MW of power from its Empire Wind 1 Project and with Sunrise Wind (a joint venture of Ørsted A/S and Eversource Energy) for 880 MW of power. More recently, in 2020, NYSERDA executed contracts for two additional offshore Equinor wind projects: Empire Wind 2 (1,260 MW) and Beacon Wind (1,230 MW). Commissioning and testing of at least one of the wind projects is expected to start in 2024. When completed by 2035, the combined projects are expected to provide a total of approximately 4200 MW of offshore wind power. Some quick facts about each leasehold area can be found at the following link (New York's Offshore Wind Projects - NYSERDA). The benefits of these offshore windfarm projects include, but are not limited to the following: Putting the state's equity goals squarely into action, Empire Wind 2 and Beacon Wind will deliver significant economic benefits to disadvantaged communities and support the responsible retirement of aging fossil fuel plants in Queens and Nassau County.

The offshore wind projects associated with the State Master Plan have been the subject of a Generic Environmental Impact Statement published in May 2018 (GEIS), and more recently in February, 2020, a Supplemental GEIS was published and approved by the PSC. The SGEIS was needed to an expected additional procurement of approximately 1,800 MW of offshore wind in the near term. These and other documents such as comments on these documents by various stakeholders can be found on the NYPSC website in PSC Case number 18-e-0071.

To maximize the long-term economic benefits to the State from the regional development of offshore wind, the selected projects leverage almost $3 of private funding for every $1 of public funding for a combined investment of $644 million for resilient port facilities in the Capital Region and Brooklyn. These investments will establish the nation's first offshore wind tower manufacturing facility ready to service both offshore and onshore wind farms in the region at the Port of Albany and a cutting-edge staging facility and operations and maintenance hub at the South Brooklyn Marine Terminal. 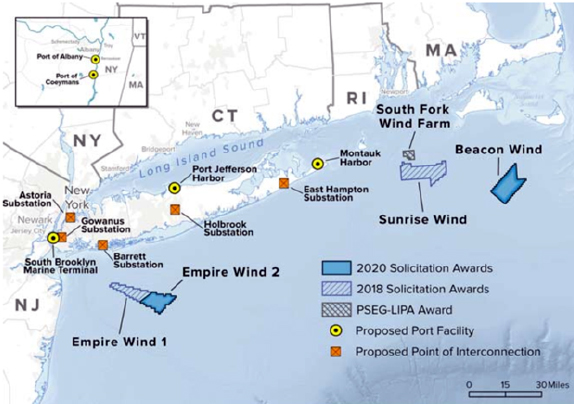 Residents of Fire Island concerned about visual impacts of the above projects might be interested in a simulation of what the Empire Wind Project might look like during the day and at night when viewed from Jones Beach. Jones Beach Timelapse Animation VOBEC is a mayor-appointed commission whose purpose is to preserve and improve the quality of the natural and man-made environment within the Village in the face of population growth, urbanization, and technological change and their subsequent demands on natural resources. These areas of focus reflect this mission of maintaining and improving the quality of our life experience and our efforts to foster unified action on environmental problems. 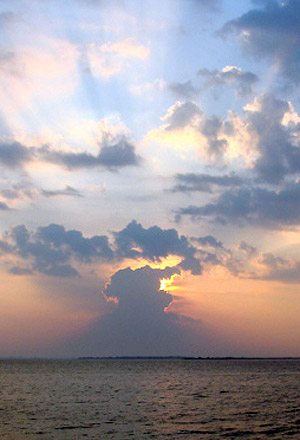