2021: Frank Piccininni
Frank Piccininni is a biologist, environmental attorney, and passionate environmentalist who is dedicated to restoring functional habitat to our human-impacted landscape who will be discussing the benefits of green infrastructure. Frank received his J.D. from Hofstra University School of Law, his M.S. in Biological Sciences from Marshall University, and his B.S. in Wildlife and Fisheries Conservation from the University of Massachusetts, Amherst. He is a Partner and Co-Founder at SMPIL Consulting, Ltd. and Spadefoot Design and Construction, through which he provides expert testimony for community and advocacy groups and habitat restoration services to private, public, and commercial clients.

2020: Abby Scher and Chris Kreussling
Abby Scher, is the co-chair of the National Sierra Club Pollinator Protection Committee. Chris Kreussling, is a member of NYC Pollinator Working Group and participant in the NYC Wildflower Week. The speakers discussed the role of beneficial insects, particularly those that prey on mosquitos and other common garden pests, as well as plantings designed to attract essential pollinators.

2018: Brian Langloss and Bridget Fleming
Brian Langloss is New York campaign organizer for Oceana, the world's largest international advocacy organization focused solely on ocean conservation. Growing up on the Gulf of Mexico, he witnessed firsthand the vulnerability of coastal economies to disasters like Hurricane Katrina and the BP Deepwater Horizon oil spill. And Suffolk County Legislator Bridget Fleming, who represents the South Fork of Long Island, has worked diligently for the past 10 years to protect and preserve our precious natural resources, such as our waterways and marine life.

2017: Marshall Brown
Marshall Brown is the co-founder and President of the Save the Great South Bay, an environmental non-profit dedicated to the bay's revitalization. Its Facebook Group has over 11,000 members consisting of concerned citizens, sailors, fishermen, and marine scientists who have come together to breathe life back into a dying bay. Save the Great South Bay has been a vital part of Long Island's environmental movement, working closely with the many other local environmental groups, and advocating at the local, state, and federal level for those solutions that will lead to a healthy bay.

2016: Angus Eaton
Angus Eaton, Director of the Bureau of Water Resource Management at NYSDEC, provided information on the classification of the Great South Bay as an impaired water body due to excessive nitrogen. He also reviewed the management strategies being considered to reduce the impact of this nitrogen loading, including the Long Island Nitrogen Action Plan (LINAP). He provided an opportunity to learn more about what LINAP is and what it might mean for our community. For more information on this plan, follow the link: Long Island Nitrogen Action Plan (LINAP)

We had engaging presentations by three well known speakers. Discussing the fight against the Moses road and for a Fire Island National was investigative reporter and journalist, Karl Grossman. Dr. Charles Flagg from the Stony Brook School of Marine and Atmospheric Sciences discussed the challenges of Fire Island in the next 50 years. Daniel Bader, Research Analyst, Columbia University's Center for Climate System Research, discussed the current projections regarding sea level rise and coastal risks.

2013: Joe Vietri
Mr. Vietri is a member of the US Army Corps of Engineers and is heading up the Sandy Comprehensive Study authorized by Congress. Mr. Vietri is the director of the US Army Corps of Engineers (USACE) National Planning Center for Coastal Risk Reduction and Sandy Comprehensive Study, which has been authorized by Congress. His focus was the Corps attempts to incorporate the reality of climate change into its future efforts to protect the US shoreline. Mr. Vietri discussed the status of this crucial project (providing context and history), how other communities are dealing with this issue, and engaged in a question and answer session.

2012: Robert Sayre
Robert Sayre was a retired English professor at the University of Iowa and spent nearly every summer on Fire Island since 1934. He had a deep interest in Fire Island environmental history and recently wrote a book entitled Fire Island, Past, Present, and Future: The Environmental History of a Barrier Beach. With his knowledge of Fire Island ecology, Robert presented the keynote address for the Fire Island National Seashore 8th Biennial Planning, Science and Research Conference in 2012. During his EAD presentation, he described the human impact on the island over the last 200 years, shared his thoughts on the recent past, and discussed his vision of the future. Sadly, Robert recently passed away in 2014 and he will be missed.

2011: Elizabeth Rogers
Elizabeth Rogers began her career as an intern for a private environmental law firm and then for the Adirondack Park Agency. She learned the joy of bird watching and the value of biological monitoring as an Endangered Species Steward with U.S. Fish and Wildlife Service. She then moved to the Natural History Museum of the Adirondacks where she served as a Naturalist and Audubon liaison. In her current role with the National Park Service, she works with park biologists to better understand the park's research and monitoring program, and she often delivers that information in presentations like VOBEC's Fifth Annual Environmental Awareness Day on October 9th.While employed by the National Park Service, Elizabeth is pursuing a graduate degree in Marine Conservation and Policy at Stony Brook University's School of Marine and Atmospheric Sciences.

2010: Carl Safina
Carl Safina is a naturalist, international expert, and national policy advisor who has written numerous award-winning books, including Song for the Blue Ocean, Eye of the Albatross, and Voyage of the Turtle. He has been profiled in Nightline, in the New York Times, and by Audubon Magazine and has been featured on the PBS special "Earth on Edge". His achievements have included: Leading campaigns to ban high-seas driftnets; Working towards international conservation of tuna, sharks, and other fishes; Helping to pass the United Nations global fisheries treaty. He spoke to us about how the ocean is changing and what it means for wildlife and humanity. He is an adjunct professor at Stony Brook University and President and founder of the Blue Ocean Institute. For more information, contact his organization: blueocean.org

2009: Kevin McAllister
Kevin McAllister is President of the Peconic Bay Keeper (PBK), which is a WaterKeeper Alliance Affiliate. He was awarded Times/Review "Educator of the Year" 2004 and the EPA "Environmental Quality Award" 2008. Kevin's accomplishments include: Pressing Suffolk County to reassess its mosquito control practices to include the spraying of pesticides and ditch digging in wetlands; Introduction of a federal "No-Discharge Zone" (NDZ) designation for the South Shore Estuary prohibiting sewage dumping from vessels; Promoting the concept of "bayscaping" (the practice of landscaping and property management practices that help enhance habitat values and benefit local water quality). He spoke to us about how each of us can make a difference in preserving the life of the Great South Bay. PBK is a not-for-profit dedicated to serving as advocate to protect and improve aquatic ecosystems of the Peconic and South Shore estuaries, including that of the Great South Bay. Plaintiff Litigation is the most effective tool with which Peconic Baykeeper furthers its mission. For further information, contact them: info@peconicbaykeeper.org or visit their web site: peconicbaykeeper.org

2008: James Howard Kunstler
James Howard Kunstler is the author of The Long Emergency: Surviving the Converging Catastrophes of the Twenty-First Century (2005), which predicted that debt along with rising oil prices would combine with climate change to bring on decades of crisis. Kunstler has also published three books on suburban sprawl: The Geography of Nowhere, Home from Nowhere, and the City in Mind: Notes on the Urban Condition, as well as nine novels. He has been an editor at Rolling Stone and his articles have appeared in The Atlantic Monthly and The New York Times Magazine.

2007: Deane Rink
Deane Rink, JD, is a science writer-researcher whose credits include Carl Sagan's 13-part PBS series, COSMOS, the Emmy-winning series PLANET EARTH, THE INFINITE VOYAGE and AMAZONIA. He has written for NASA, The National Geographic, The Smithsonian and American Museum of Natural History. He has served on panels for the National Science Foundation and the National Academy of Sciences and has been to Antarctica seven times to work on scientific projects. 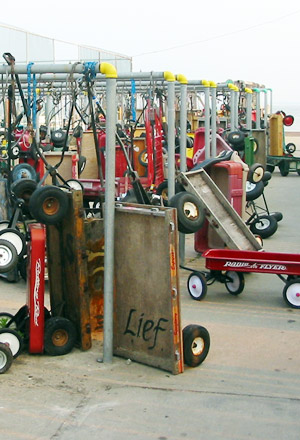